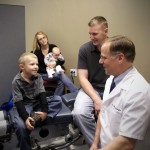 I love this story about how we helped a child recover from a cough using natural treatment at our top St. Louis chiropractic clinic. So often we reach for the medicine cabinet for our children – but isn’t natural treatment so much more gentle?

“My son had picked up a nasty dry ‘barking’ cough in early Nov. He ran a high fever and it got so bad at night that he would vomit the mucus that was in his throat. He would wake up doing this and would panic because he wouldn’t be able to catch his breath when it would occur. We went to his doctor only a couple days after no changes were occurring. They gave us a prescription for antibiotics and told us to give him several breathing treatments with a nebulizer and some other medicine we were to add to it. His night time episodes started to get a little better.  After the antibiotics were gone the cough slowly got worse and worse. We brought him back in and they prescribed a different antibiotic and more breathing treatments. It started to get better and then as the antibiotics were done it came back all over again. This all happened over a 2 month period. The cough never really went away fully.

“We talked to Dr. Dusty about what was happening with him and he set up a time to have us come in for some Nutritional Response Testing.  After doing so he found that our son most likely had a situation that was fungal and parasitic. He got us on a nutritional plan that consisted of about 4-5 different kinds of supplements to give him. After only about 2 days the cough was very improved. In about 5 days the cough only occurred once in a while and never at night. And about only a week later there was no sign of it at all. We are very thankful to Dr. Dusty and everything he has done for us over the years. He treats both of our children (5 yrs old and 4 months old) with adjustments and has been doing so since they have each been only a couple days old.

“Thank you again and thank you to all your wonderful staff.”

What Is the Brachial Plexus?

What Is a Frozen Shoulder?