Just last week, I attended a birthday party where a long-ago friend had a daughter turning twenty-one. This friend and I were like sisters in high school. Lots of her family was there, and I was catching up with what had transpired in the past fifteen years. Sandwiched between my friend and her older sister, we eventually started talking about how her sister met the new man in her life. 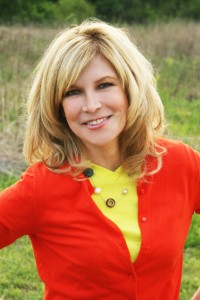 That’s when things started to get interesting.

Seems when the sister first met her new man, she told him all about her “hormones.” She told this man what the doctor had said—that she was in the midst of menopause and that she had no control over her emotions (confirming that she was indeed a basket case with holes in her basket.) As a female myself, I thought she was letting herself off the hook for any future bad behavior, based entirely on her hormonal fluctuations. And, in truth, had I been that man, I would have run screaming for the hills.

Instead, this man stayed. She explained that for the next two years, she would wake in the middle of the night in a cold sweat (this saintly man beside her), throw off the bedcovers and shout, “Turn on the fan! Turn on the A/C! I’m having a hot flash!” Patiently, this man would get out of bed, turn on the fan, and turn down the A/C just as she asked. Then, sometime later (after they both fell back asleep), she would grab the covers and shout, “Turn off the fan! Turn off the A/C! Can’t you see I’m freezing to death?” As you might not have guessed, the still-patient man would then get out of get out of bed, turn off the fan, turn off the A/C, and climb back into bed. Finishing the story, she said, “I guess he must really love me. If he stayed with me through menopause, he’ll stay with me through anything.”

Inside, I silently gasped.

Ladies, menopause should not be the battleground through which the men in our lives prove their undying loyalty and love. Nor is it some sort of medieval torture device. Should we toss our men on the stretching rack to see just how much they can take? For that matter, should we put anyone through the “torture” of our symptoms—most of all, ourselves?

Supposedly, 85% of women experience hot flashes during menopause. Don’t you wonder about that other 15%? Don’t you secretly hate them? For me, that teeny 15% makes me think that hot flashes might be preventable, or at least manageable. And, if so, why not try the simplest solution first?

As a self-proclaimed, natural guinea pig, I will often reach for over-the-counter products (some which have been clinically researched; some which haven’t) to see if any of these products can help me. With natural products, it usually takes a while longer to experience relief. But after a month, if it isn’t working, I assume it simply doesn’t work for me. Remember, every body is different. Some products may work for your friends, but not for you. If over-the-counter doesn’t seem to be cutting it, speaking with your health care provider might. I’m big on chiropractic and the natural solutions they offer, but even if this isn’t your thing, they could still assist you with finding the right solutions based on what your body is telling you—a hot flash here, a fuzzy thinking there—and ameliorate or even stop your symptoms.

If you decide to do nothing and your symptoms are particularly acute, try not to repeat your story to a long-ago friend at a birthday party . . . You just might end up in an online blog!

Why You Can’t Turn Your Neck All the Way

How to Relieve Your Chronic Headaches with Better Nutrition

How to Relieve Whiplash Naturally

Text Neck: What It Is and What to Do About It